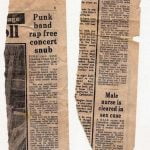 Martin Blank from Gob on the Tyne has prompted me to transcribe an old cutting from Jeff about an earlier exploit of the band….  This is it!

Punk rock band crawling chaos hit a wrong note when they made overtures to a Christian group.

For when the Tyneside-based musicians offered to play free in a church coffee bar they were turned down flat.

“We were amazed and shocked at being turned down” said band member Eddie Fenn last night.

“We thought we were doing them a good turn. We were surprised when they turned us down”.

“It is supposed to be a Christian organisation and they wouldn’t even let us play” said the 23 year old youth and community worker of Front Street, Tynemouth.

They were due to appear tonight at the Tynemouth Crossroads coffee bar in the centre of the town.

“They cancelled the show with no explanation other than ‘The coffee bar is run by a group of Christians to help young people in Tynemouth, and seeking to follow Christ’, and ‘only two people on the committee knew about it, and the rest of the committee are not happy’”, said Eddie.

“One wonders at the reasoning behind such a bland statement when you consider the appalling lack of recreational facilities for teenagers, the fact the group were willing to play free of charge and that many youngsters were eagerly awaiting the performance. We have a medium sized following around here.”

The four man band, which has been formed for 11 months, is due to release a single next month called “Sex Machine”.

One of the organisers of the coffee club said that they had apologised to the group for the mix-up.

David Armstrong, 32 year old painter and decorator from Tynemouth said; “More than a month ago the band came to me and asked if they could play at the Friday night coffee bar.

I told them I would ask the other members of the bar, but I forgot and when the group came back I said it would be alright.

When the other organisers found out they weren’t too happy. They said it hadn’t been discussed properly.

It was really an internal disagreement. I feel sorry for the group and I have apologised but I don’t want anyone blamed for it.!

The band did eventually play the gig.  All went well and no-one was offended.  Pip pip!

Main image: “The Fall of Numenor,” an allusion to Atlantis made by J.R.R. Tolkien well after HP Lovecraft did his stuff.